Canada’s Top Hotels were rated using the trivago Rating Index (tRI®) based on over 200 million travellers ratings from over 30 different booking sites, trivago.ca looked at accommodations across Canada to determine the country’s favourite places to stay. From top-class hotels to cozy B&Bs, discover Canada’s best-rated properties, both nationally and regionally. 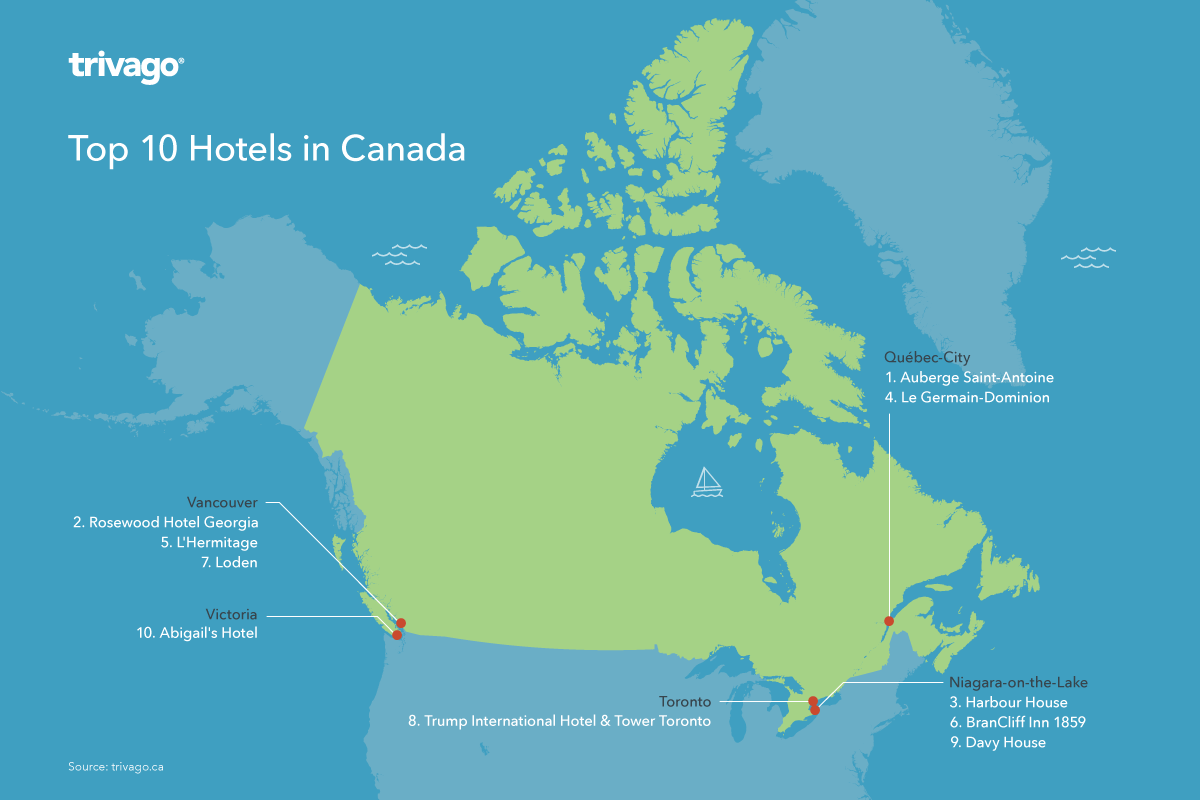 The Rosewood Hotel Georgia takes second place thanks to its remarkable reputation for hospitality, which earned the hotel an online rating of 96.04. The Rosewood Hotel Georgia is one of 5 properties from Vancouver that are among Canada’s top spots, making Vancouver the city with the most hotels featured in the nation’s Top 25. Niagara-on-the-Lake follows this impressive record with 4 hotels among the country’s best, including the Harbour House which completes Canada’s Top 3. 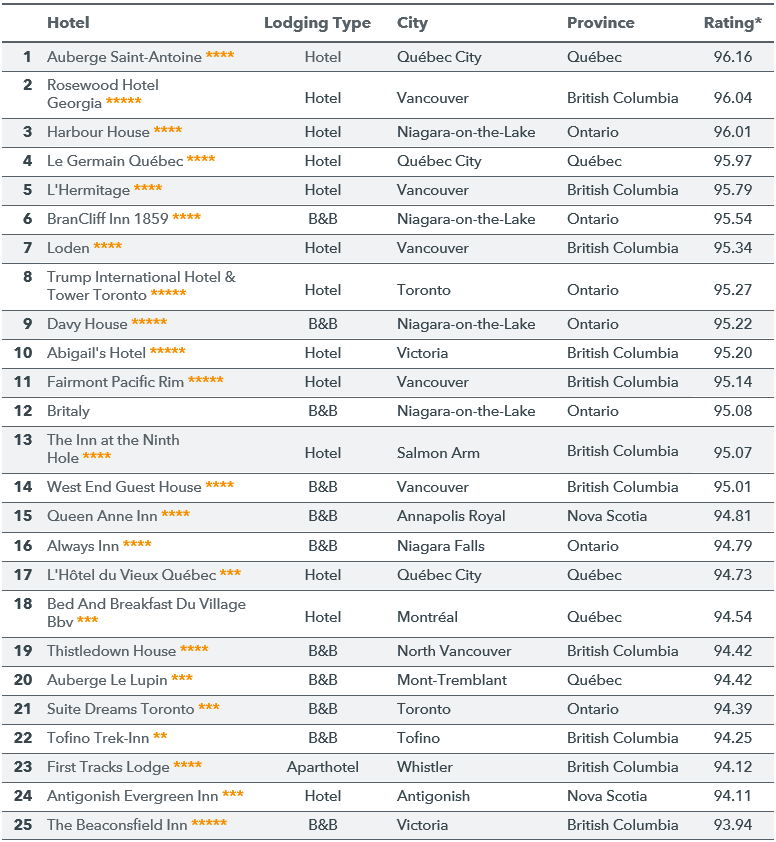 * Calculated by the tRI®, the rating is based on the hotel’s online reputation, with 100 being a perfect score.

On a provincial level, British Columbia dominates in the nation’s top list with its hotels taking about half of the prestigious spots.

While Nova Scotia may only have one hotel in the Top 25, the province’s hotels are holding to a golden standard overall with the highest rating in Canada (83.23). Prince Edward Island (82.25), and Newfoundland and Labrador (81.35) fall slightly behind, giving Maritimes’ accommodation the best online reputation. Québec and British Columbia complete the Top 5 Canadian provinces list with hotels rated at an average of 81.13 and 81.02 respectively. 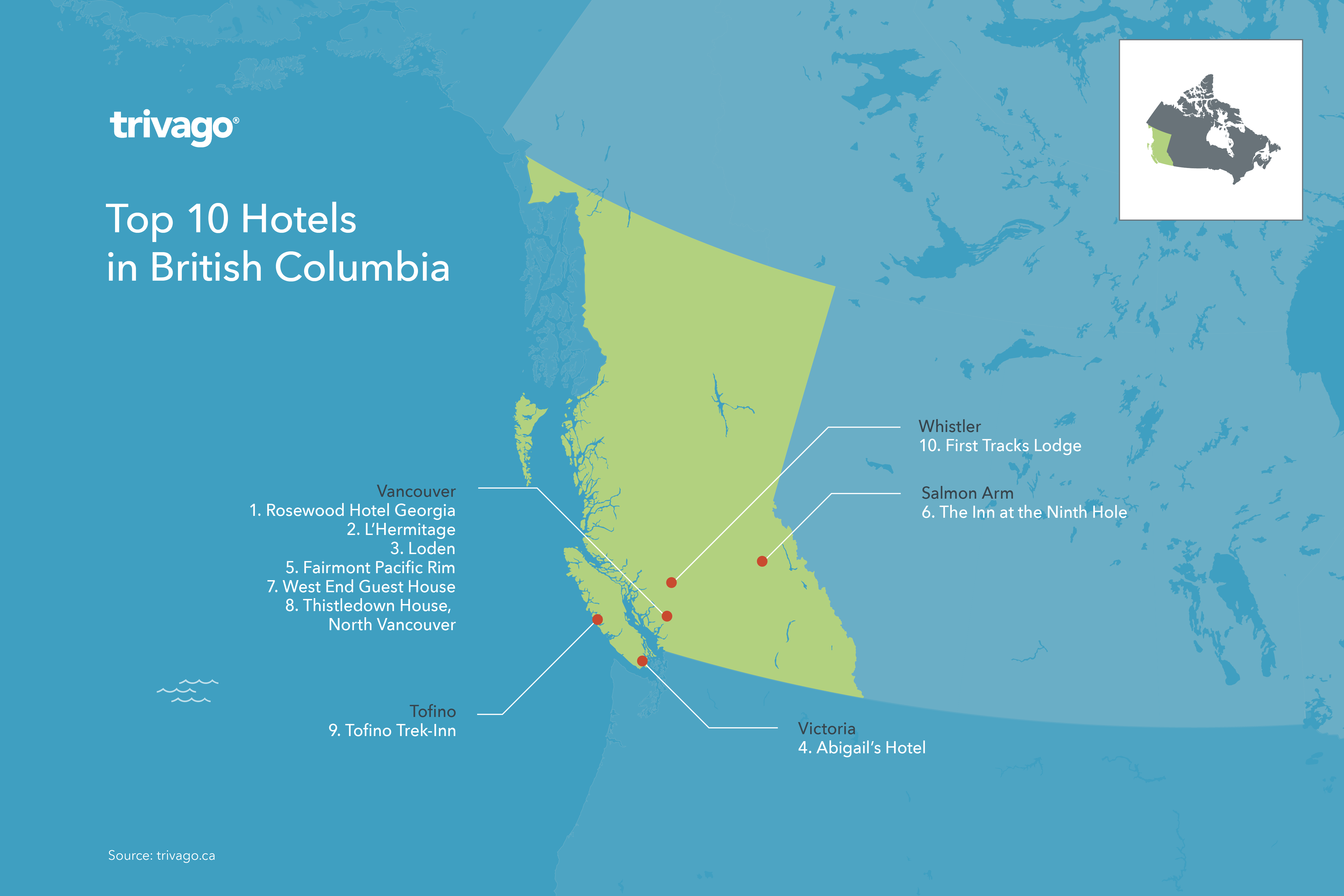 The elegant Rosewood Hotel Georgia is the #1 Hotel in British Columbia according to guest online reviews. This historical landmark hotel is followed by four star hotelsL’Hermitage and Loden, also located in Vancouver. Hotels from Victoria, Salmon Arm, North Vancouver, Tofino and Whistler complete the province’s Top 10. Testifying to the quality of British Columbia’s accommodation standard, all Top 10 hotels were also recognized among Canada’s Top 25 Hotels.

Top 10 Hotels in the Prairies 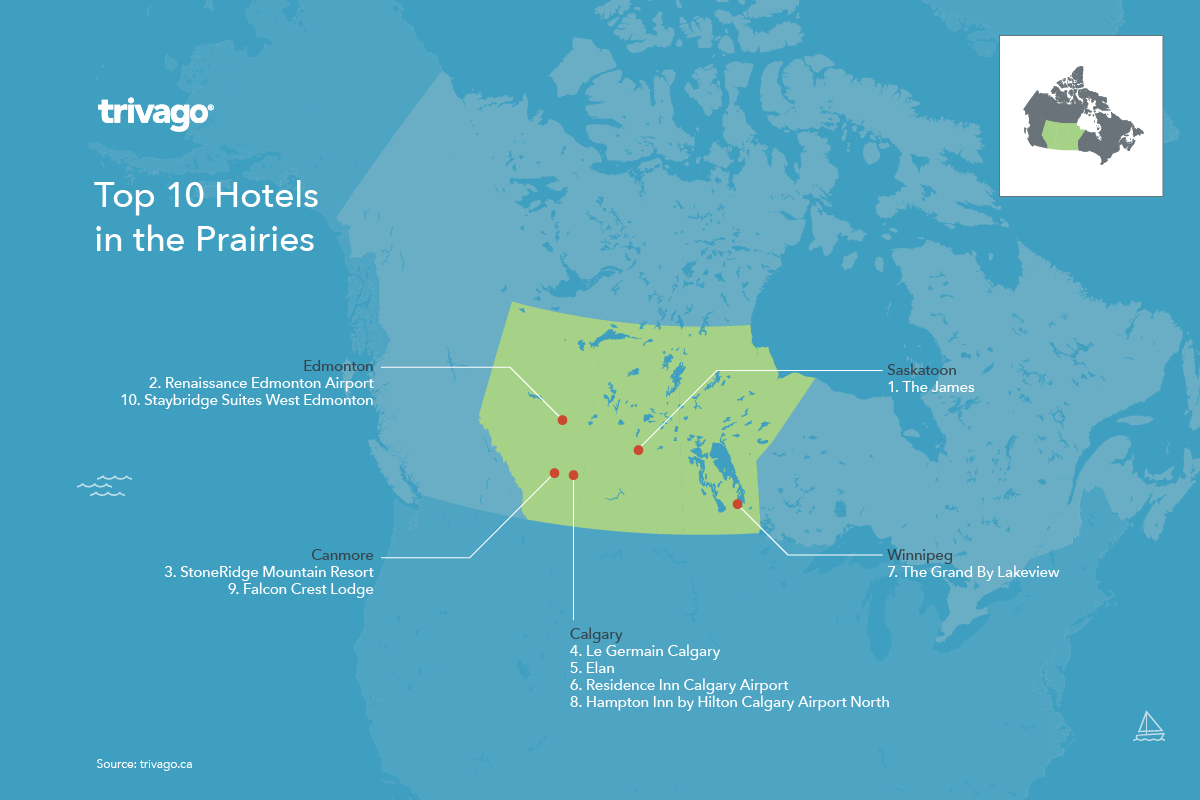 The James in Saskatoon takes the Prairies’ first place spot. The hotel leads the Top 10 with a rating almost 3 points higher than the runner-up, and is the only hotel from Saskatchewan to snag one of this year’s trivago Top Hotel Awards. Albertan hotels reign supreme in the Prairies, with 8 of the 10 best-rated hotels coming from the Wild Rose Country. Manitoba also sees one of its hotel making the cut, with The Grand by Lake-view in Winnipeg rounding out the list in 7th place. 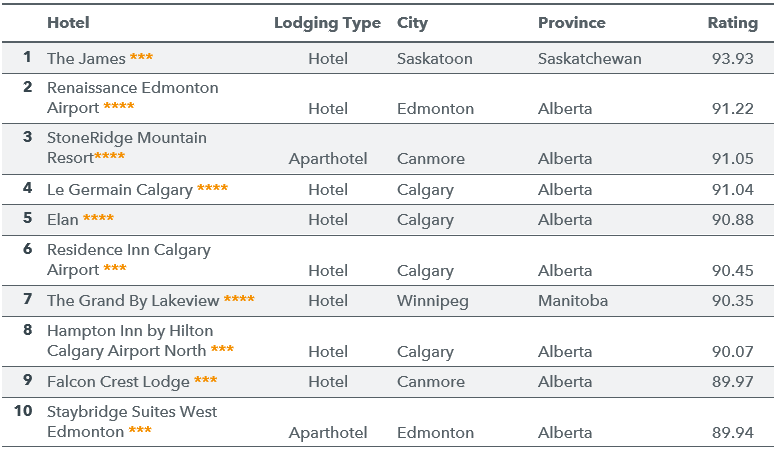 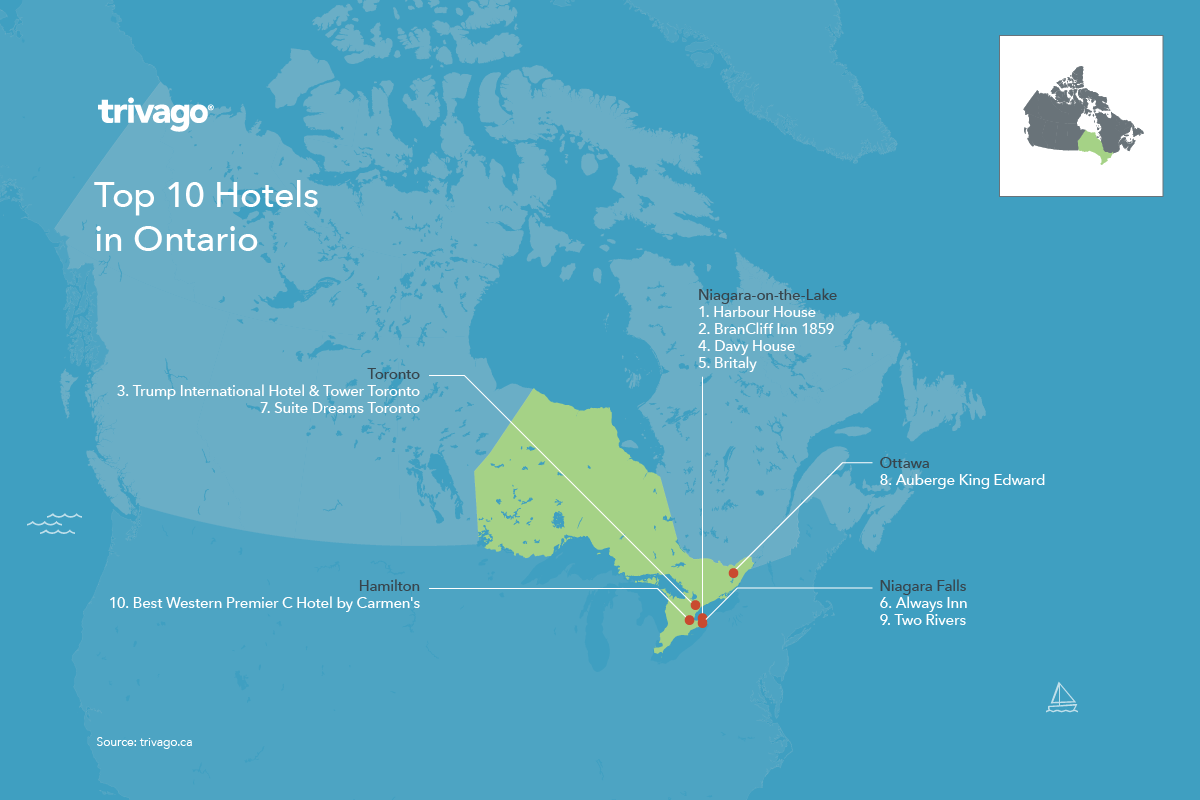 The charming 4 star Harbour House hotel is Ontario’s Top Hotel. The BranCliff Inn 1859takes second place, and is also the best-rated B&B in the country with a 95.54 rating. B&Bsmake up a majority of the province’s Top 10 list – a significant difference compared to the other regional lists where hotels are heavily represented. 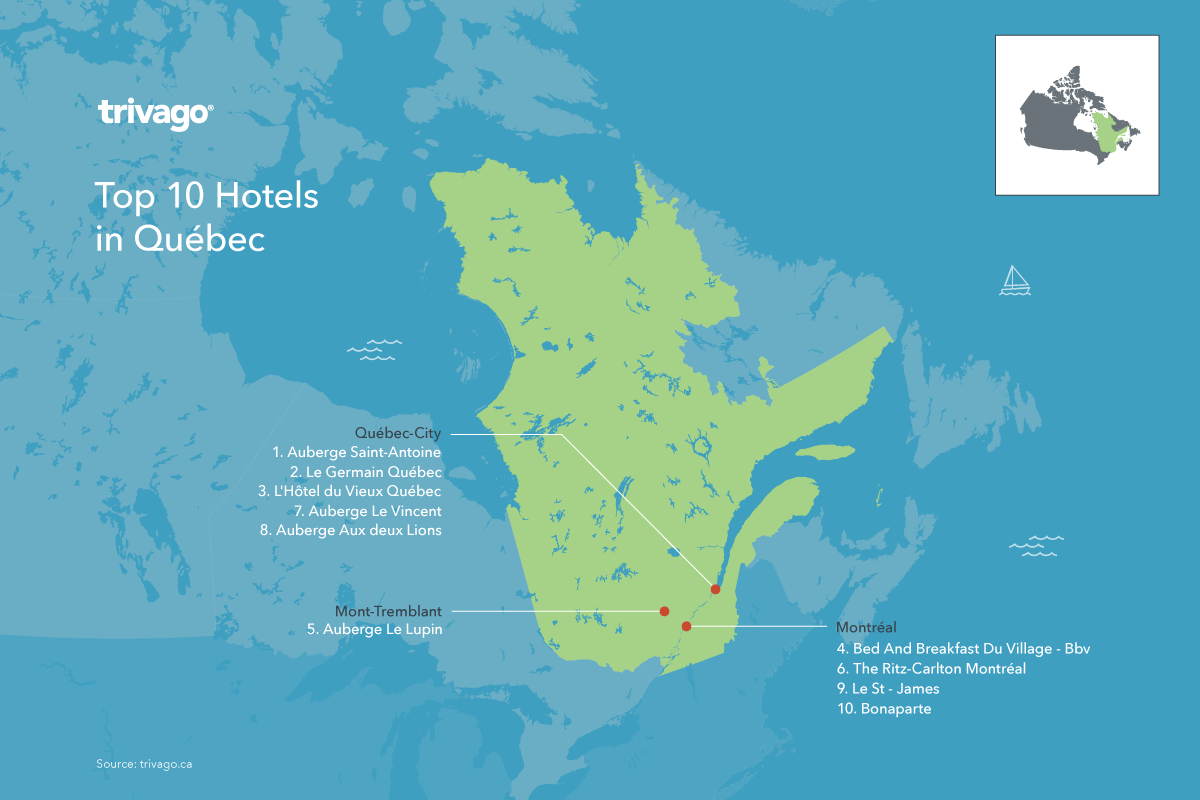 Top 10 Hotels in the Maritimes 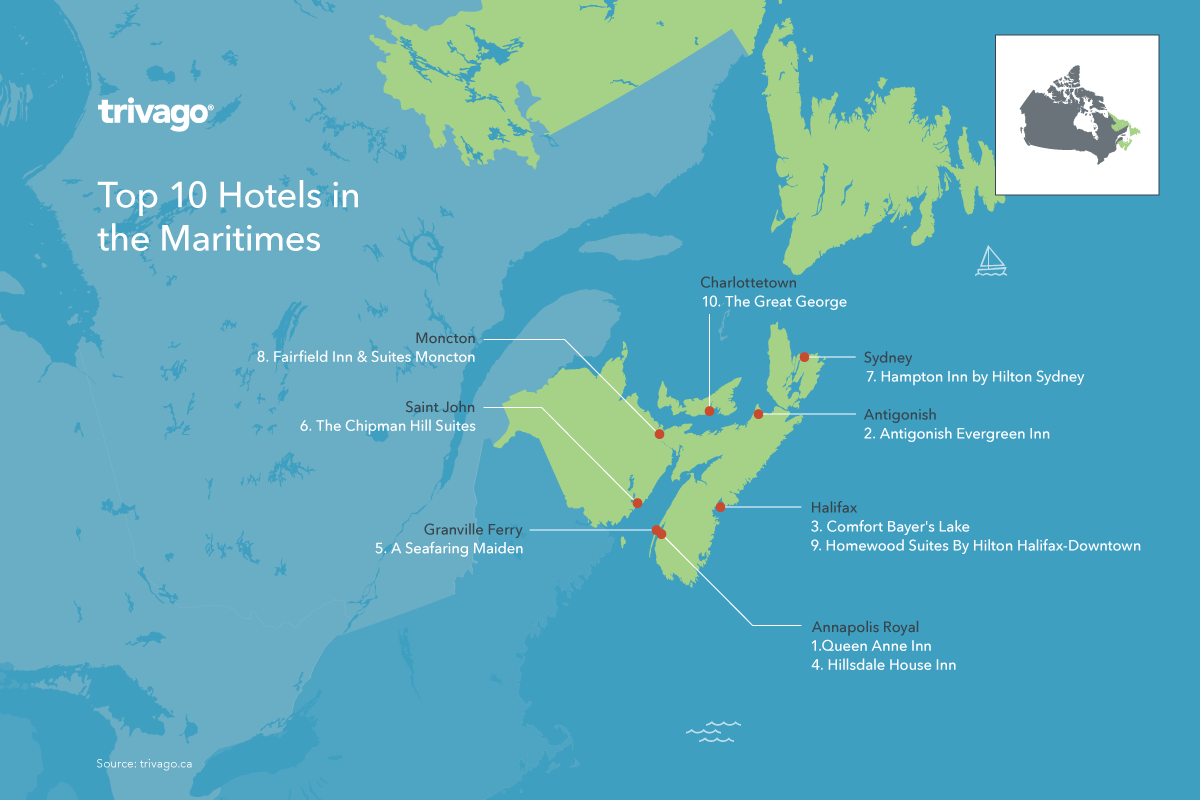 The Queen Anne Inn in Annapolis Royal tops the Maritimes’ list, and is also the onlyB&B to take first place in this year’s trivago Top Hotel Awards. With hotels located in 8 different cities, this region’s Top 10 list is the most diverse of all. While Nova Scotia‘s hotels prevail in this ranking, New Brunswick hotels The Chipman Hill Suites and Fairfield Inn & Suites Moncton take 6th and 8th place. Representing Prince Edward Island, The Great George located in Charlottetown closes out the ranking with a rating of 90.35. 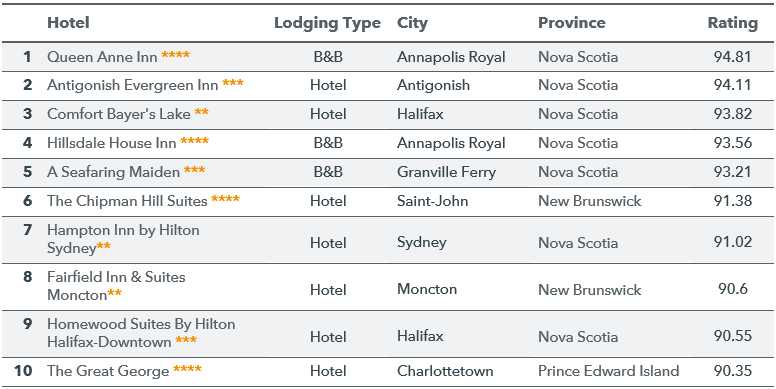 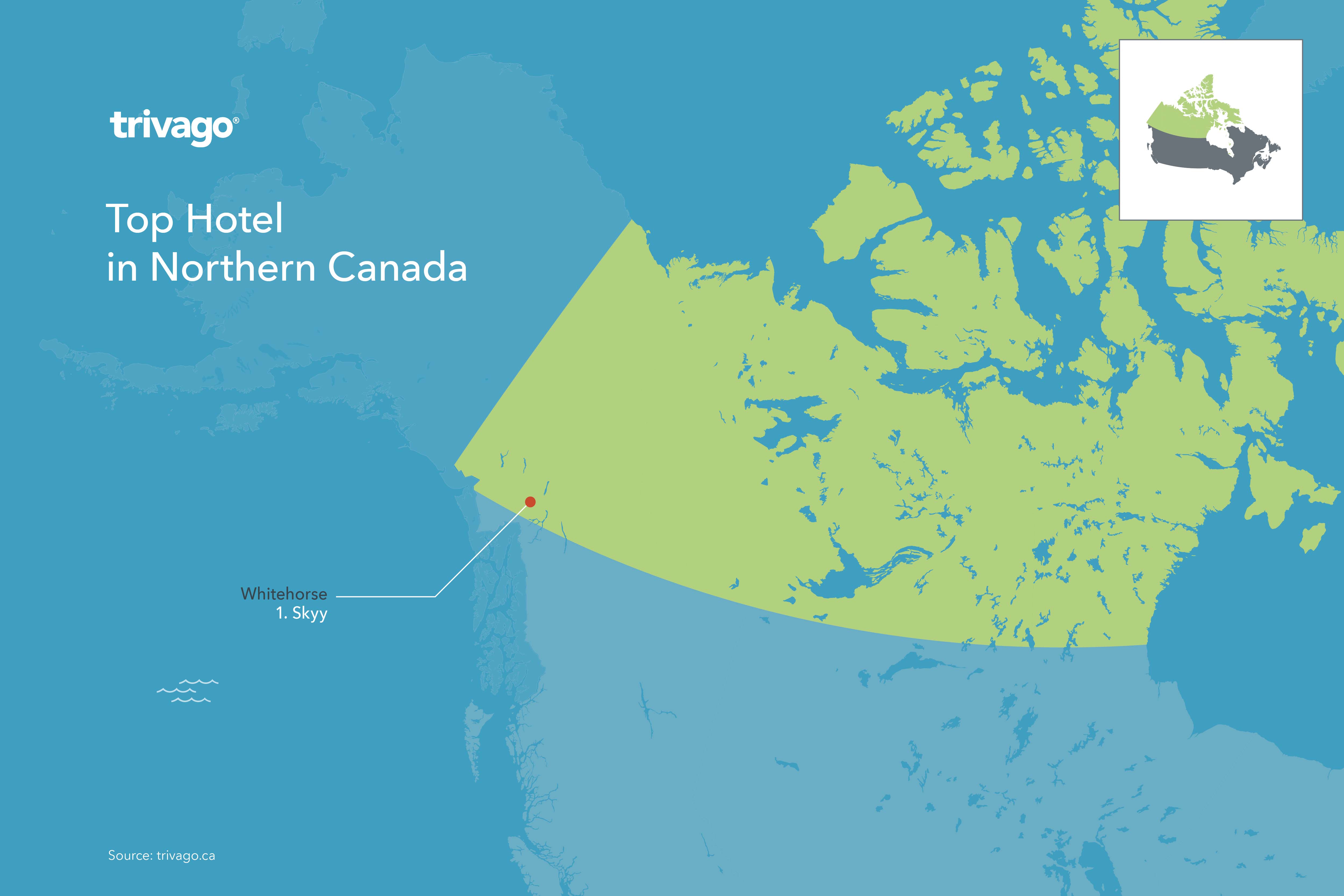 The 3 star hotel Skky is the Top Hotel for Northern Canada. With an average guest rating of 81.22, it is the best-rated hotel in all of the Yukon, Northwest Territories, and Nunavut.

About trivago Rating Index
With over 200 million user ratings gathered from hotel, booking, and review sites all across the web, we’ve crafted a comprehensive, transparent, unbiased index for hotel ratings that we call the tRI®—and we are happy to share what we find. Hotels with over 500 user ratings were taken into account. We consider 100% as a perfect score, because how much more perfect can hotels in a city get?

About trivago
Travellers find the ideal hotel for the best price on www.trivago.ca. trivago is the world’s largest online hotel search site, comparing rates from over 700,000 hotels on over 200 booking sites worldwide. trivago integrates over 180 million hotel ratings and 14 million photos in order to make finding the perfect hotel easier for users. Over 80 million visitors per month find their ideal hotel by using trivago’s various filters. trivago was founded in 2005 in Düsseldorf, Germany and currently operates 52 international country platforms in 33 languages.